Just as the world is made up of all kinds of people, there are also many different types of animals. Many of which can be domesticated, and a lot which can be used for various forms of entertainment, such as sports that includes animal racing. Some of which are quite unique.

One may not think that the snail, which is so highly recognised for it’s slow, 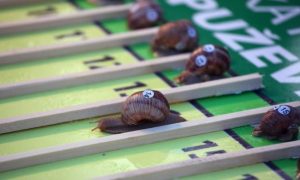 relaxed movements, would be considered for racing. But they are, and there is actually a World Snail racing event which has taken place in the UK for 25 years. The rule is that the participants must be the European Garden Snail. Being as most snails look the same, each one participating in the race must have an identification marking on their shell from paint or a sticker. The race is simple, as the winning participant is the snail that crosses a thirteen-inch circle to the finish line.

Another species of animal which many don’t recognise for their speed is the camel. They are more known for their durability, and for being able to go for long periods without water while travelling the hot deserts. But, there are camel races that have become most popular in India. Camels used for racing can often reach a speed of 25 mph, and maintain this over a distance from anywhere between 2.5 to 6 miles. Some will be surprised to learn that some of the most prestigious camel races are actually held in Queensland Australia.

When one is looking at popular animal races, they will surely not forget about the greyhound races. This is a sleek athletic breed of dog which has been highly recognised for their speed. Some of the best racers can reach a rate of 45 mph. The introduction of this form of racing dates back to Queen Elizabeth 1 from England. To this day, it is still a popular animal sport.